Fly posting and the public realm in Bremen

As actors in urban space we are involuntarily participating in a long-term experiment. This experiment consists of: the intention to improve the image and economic performance of a city through control mechanisms and impulses; the continuous desire for regulation and domination of urban space with its entropic tendencies; as well as the somewhat newer approach to use and make useful immaterial factors (often summarised under the diffuse notion of creativity) for these ends. Since this endeavour is experimental, however, it draws both on harsh methods and soft measures – in the hope that this helps to improve the formation of the body, sound and harmonious, yet leave it edgy and quirky enough. 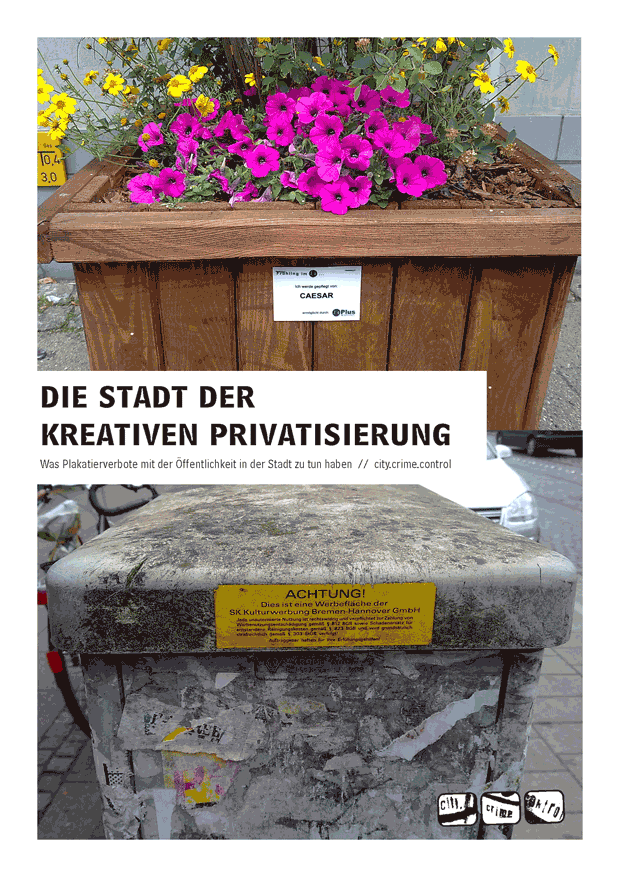 The competition for attention, popularity and success of cities postulated towards this end is both main impetus and questionable justification. The most obvious sign of this drive are spectacles and architectural mega projects, such as the European Capital of Culture, Ruhr.2010 and the construction of the »Elbphilharmonie« in Hamburg. Urban administrators, however, are suffering from a specific schizophrenia: whilst these recipes are broadly similar trends in western metropolises, they simultaneously aim to achieve distinctiveness between the (formed) cities. This leads to uniform results – perhaps apart from particular iconic projects, as these conversely attempt to shine through the disdainful reality – particularly so however, in terms of ramifications for the social and cultural climate in cities.

Urban planning tries to make use of all dimensions of cultural production for its own ends. What is missing from this contemporary urban paradigm, however, is the right of continuance and continuation permits as well as self-determination for independent no- or low-budget projects, for social and political initiatives and last but not least the means to secure the livelihood of their actors. They often gain no more from this instrumentalisation than to feature in the image brochures of city marketing. For cultural production the motto ‘Change through Culture’ leads to the stranglehold of unprofitable fondling and rough patronising dominance without changing either legal or economic destabilisation, which pertains – besides the ever precarious cultural activity – to large segments of contemporary society.

In these ‘basements’ of cultural production, self-made flyers, stickers and posters are the cheapest, most effective and for want of other resources often the only means to publicise their activities beyond the immediate context. These media are carriers of information in the public realm, which are squeezed in between the display windows of retailers and industrial advertising spaces. Since the emergence of spirit duplicators and XEROX photocopiers at the latest, the urban administration in Bremen attempts to regulate fly posting for good. To this end, they issue by laws and exemplary penalties while periodically nurturing a medial discourse of decay. So far, all these measures were only successful to temporarily and spatially limited extents. Fortunately, fly posting continues to be part of the cityscape, similarly to other visual forms of expression such as graffiti, street art, tags and stickers. The attempts of a containment policy, conversely, pertain to a discourse according to which tattered billboards and hoardings are the precursor of the decline of neighbourhoods. This seemingly inevitable decline is seen to begin with aesthetic ‘depreciation’, followed by vandalism and drug-related crime and leading to social and economic decline, resulting in its complete slummification. This theory serves since many years, variously in a more discreet or more aggressive pitch, in urban policy in Bremen, without its inevitability winning plausibility in constant repetition. Regardless of the causes and consequences of processes of social change, this reinforces the idea to establish social control and policing methods as the only effective response. One is bound to entertain the suspicion that this discourse focuses less on public welfare and rather serves to protect local retail and economic interests. This is particularly imminent in the face of the introduction of business improvement districts (such as lately in Bremen’s Viertel) that create wide-ranging means of control with respect to the gestalt and design of public space. 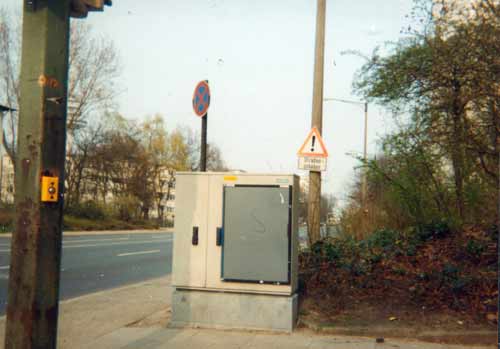 Since the measures against fly posting so far have proven not to be very effective, the current approach of the urban administration in Bremen privatises the surfaces of urban functional objects of all kinds, from rubbish bins to electric wiring boxes and hence all surfaces well-suited for attaching posters and stickers. They are entrusted to an agency, the sk kulturwerbung, so that they market these surfaces, but primarily safeguard them from access by others. Since this cession is neither comprehensible nor in most cases successfully marketed, each wiring box features little yellow warning notices. These mark the surfaces as the property of sk kulturwerbung, prohibit using them to attach posters and threaten with half a dozen paragraphs against their infringement. This cession is a dispossession in a double sense: on the one hand, surfaces in the public realm that are not economically exploited are commodified and thereby withdrawn from their usage as free and useful communication platform; on the other, the surfaces are managed by an agency that is not subject to direct democratic influence and instead sees any usage by others as to be admonished behaviour of competitors.

Again and again the attorneys of this agency, which apparently was founded with only this aim in mind, proceed against those cultural projects in the city whose events used to be advertised on these surfaces. By means of threatening with drastic consequences they are summoned to acknowledge the rights of the agency in writing and to take responsibility for the usage of urban surfaces. As long as those concerned do not revoke this threat – which in the face of the legal shiftiness is a sensible reaction – they accept with their signature that in the case of an infringement against the Memorandum of Understanding to pay a contractual penalty of 15,000 Euros. This sum is for most projects existentially threatening and endangers their daily work.

An answer to such efforts of urban regulation was formulated twelf years ago. When in the context of an  ‘Aktion Saubere Stadt’ (Action Clean City) another advance was made to ban fly posting – preparing the ground for the current privatisation – various organisations and projects started a counter campaign under the motto ‘fly posting welcome!’. The quintessence of this campaign was the demand that free hoarding must be available at no cost so that subcultural and political projects can publicly advertise their activities. From those responsible then they demanded a dialogue in the course of which merely an insignificant discount was offered. The dialogue was consequently called off by the initiatives. (Subsequently, this led to the formation of the group city.crime.control by members of the campaign in order to criticise urban development and policy in their different forms.)

Fly posting remains an important means of communication. It is part of what makes up the space between built architecture, traffic routes, squares and sidewalks. So long as the concept of privatisation and commodification remains unchallenged, appeals to those responsible will not result in more than at most a few miserable reservations for ‘cultural posters’. This is why it is so important to demand the minimum [or indeed the impossible (Chatterton 2010)]:
free fly posting must be respected as public communication and the privatisation of these urban scapes be stopped so that they can continue to be used as publicly accessible commons.

>> German version of this text

This blog was founded in preparation of the public laboratory "Me, Myself & the Media", which took place in Bremen, DE at September 2009.

Since then we publish here randomly texts and other informations about media und city between control, self-empowerment and hyperreality.